The shooting last week in Aurora has captured the media’s attention for the past week, which is quite impressive considering the media has ADD.  One of the underlying themes of this story is the question of gun control.  Many people have argued that we need to control guns to protect people from such tragedy again.  My general response to tragedy: data mining.

While I am completely opposed to guns (despite my amusement at reading an issue of “The Complete Book of Handguns”), I do wonder if gun control would have really stopped that shooting.  I read an article recently that showed that there was a decline in gun ownership over the last 30 years.  There is also this blog that suggests that the gun culture of America is waning.  So, I decided to do a little bit of my own research:

The above figure shows all the countries that had over 200 people die in the last 5 years in mass shooting incidents, as well as listing the number of shooting incidents that occurred in each country. I looked through Wikipedia for the amount of shootings and mass murders that occurred over the last 5 years, and I noticed a few interesting trends.

America really tries to revel in the fact that most mass shootings happen here, ignoring the data that hundreds more are killed in the Democratic Republic of Congo (mostly by Joseph Kony’s Lord’s Resistance Army – remember that guy?), Iraq, Pakistan, and Mexico.  While it is true that the frequency of mass shootings is higher here, the loss of life is considerably less*. 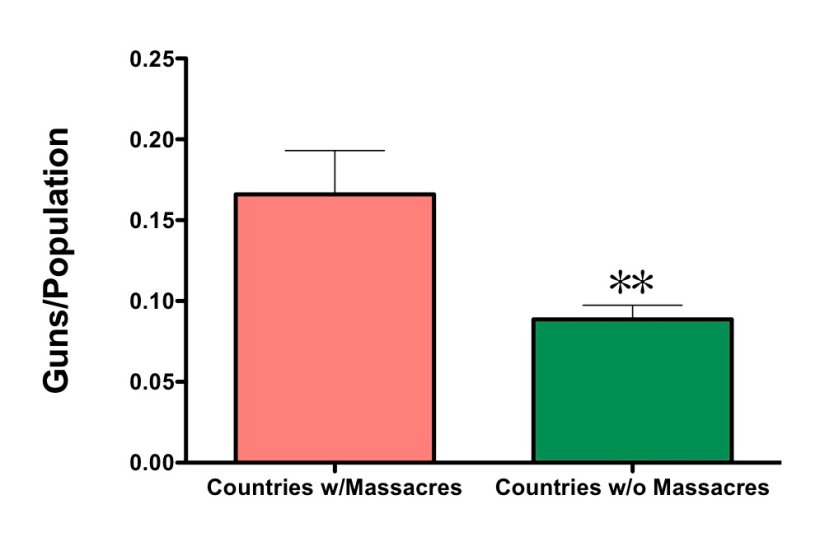 As you see above, there is no correlation between the total number of people killed in a five year span compared to the number of guns in a population, or the world gun ranking (according to Small Arms Survey).

So, while limiting access to guns doesn’t guarantee that incidents like Aurora won’t happen, societies with guns are more likely to have these types of shootings.  But, I think the point of this statistic is not that guns cause violence, it’s that the mentality of a society that feels the need for guns is what causes the violence.  If you compare China and the US, China has 3 guns for every 100 people, while the US has 89.  While the US witnessed 258 people killed in the last 5 years by mass shootings, China saw 241.  Most of the killings in China during this period were caused by people wielding knives and axes.

I think China is a perfect example that it’s the mental state of individuals who perpetrate these crimes.  And if you look at all the other countries on this list, it’s paramilitary groups or terrorist organizations, or gangs that are responsible for these attacks.  While we like to dismiss this behavior, there is a fundamental ideology that leads someone to join one of these organizations.  And often times, it’s a product of a dysfunctional society.

I would argue that it’s the media’s morbid curiosity in these killings.  A video by Newswipe’s Charlie Booker shows an interview with a forensic psychologist who argues that the news propagates antisocial behavior, even encouraging “copycats” to commit mass killings.

Helen Lewis’ article in the New Statesman even looks at what papers got it right and wrong in their coverage of Aurora.  I believe that the rise in gun violence corresponds to cultural changes of the last few years, and if you look at the following plot, it would appear that a steep rise in the number of shooting incidents every 5 years occurs after 1980.  This is divided into shootings in the workplace, soldiers shooting other soldiers (not in combat), school shootings, and shootings based upon religion.

And if you look at other types of shootings, this trend seems to follow across regions.

While there was a general rise in gun violence since 1900, there was definitely an inflection point around 1980-1990. And many can draw conclusions of their own as to who is to blame for this recent rise (or if in fact this increase exists, much like those climate-change deniers), but I would just like to throw out for sake of argument that CNN first broadcast on June 1, 1980.  Whether the 24 hour news cycle perpetuates mass gun violence is definitely up for debate, but I would argue that news broadcasters tread a fine line between covering a story and romanticizing a killing.

Now back to comedy-related posts. What’s up with Daniel Tosh, huh?

One thought on “Guns don’t kill people, Massacres do…”