It seems like every week there is a new tragedy, a new attack that kills people senselessly.  One of the things that got me about the Boston Marathon bombing was, was this terrorism? There are many different definitions of terrorism, but the FBI defines it as “the unlawful use of force and violence against persons or property to intimidate or coerce a government, the civilian population, or any segment thereof, in furtherance of political or social objectives”.

I really was curious about why the marathon bombing was immediately defined as a terrorist attack, but not the shooting at Oak Creek.  Clearly, if the perpetrator is Muslim, it has to be terrorism, according to the media.  But is terrorism exclusively the domain of Muslims?  If a suspect of an attack is Muslim, does that immediately mean he/she is a terrorist?  Why can’t they just be a regular lunatic, like white people are afforded to be?

I decided to get at the data on terrorism in the last 12 years to see if there were any trends that might give some insight or perspective on why terrorism happens.  One of the first things I wanted to examine was the relationship between Islam and terrorism.  I should point out that I’m aware that there is a difference between normal followers of a religion and the perpetrators of crimes under that religious banner.

Before I show the data, some clarification of my methods (since people complained about it before).  So, I took all bombings and armed assaults from the Global Terrorism Database from 2001-2011 that met the following criteria:

Basically, the attacks cannot be associated with a war (though may be in a wartime setting), and must be with the intent to create “terror” in a broader context, not just among the victims of an attack.  So, school shootings in the US and the Norway attacks are not considered terrorism, as they are more isolated acts without a deeper political motivation.  Of these incidents, I counted the number of incidents and casualties that were ascribed to specific terrorist organizations (e.g. Al-Qaeda, Tamil Tigers, Eta, FARC). 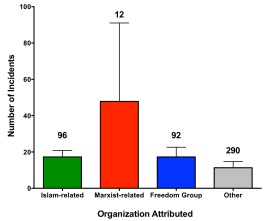 Even though I artificially grouped the terrorist organizations, there were three clear major influences on forming an organization: Islam, Marxism, and Freedom.  It seems unlikely that becoming Muslim, Communist, or pro-Liberty is the cause of terrorism, as these types of people exist in most countries without terrorism.  So, it is more likely that some other set of factors promotes the creation of terrorists using Islam, Marxism, or Liberty as a tool for conversion.

So, what are the factors that make people Islamists, Marxists, or Revolutionaries?

Studies have shown that education or wealth are not strong predictors on whether someone becomes a terrorist.  In fact, it appears that most terrorists are middle-class and well-educated, which makes sense, as there’s nothing more entitled and selfish than trying to kill people to prove a point.  So, if poverty and education aren’t responsible, what promotes terrorism?

I assumed that the underlying cause of terrorism is one of personal unhappiness.  People must have given up all hope to kill people to affect change rather than using non-violent means.  Fortunately, the Legatum Institute, releases a yearly “Happiness” index.  It scores prosperity in countries based upon 8 subcategories:

I wanted to see if there was any correlation between terrorism and the 8 metrics of the Legatum index, in hopes of identifying certain factors that are responsible for increased terrorism in a country.  If you’re observant and wondering why the X-axis is numbered strangely, I had to plot the log of the number of attacks against the subcategory index score because the sheer number of attacks in Iraq were so much higher than any other country (~4000 in Iraq compared to an average of 70 for all other countries). 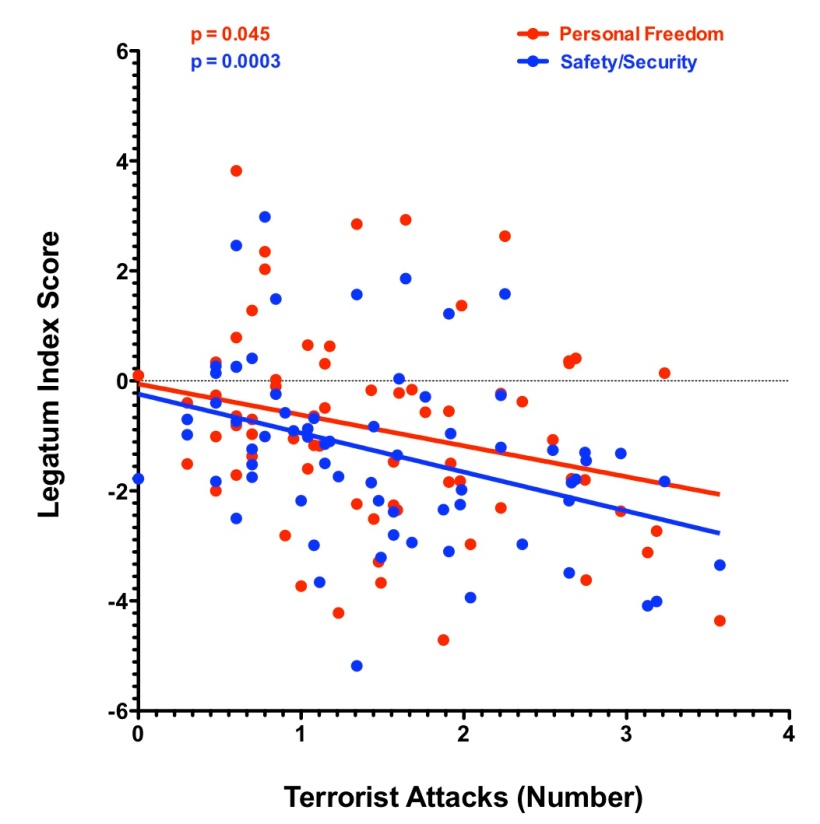 So, I decided to look at the same index on a religious basis, by comparing the proportion of certain religions in a country against the Legatum Index.

Interestingly, there were extremely strong correlations (p<0.0001) when comparing a country’s Muslim population against 6 of the 8 Legatum subcategories.  The other 2 categories, Social Capital and Economy, were still quite significant, but had a weaker relationship (p<0.005).  It’s worth mentioning that all 8 showed a negative correlation between a country’s Muslim population and their “happiness”.  It’s hard to infer causality from correlations, but if you did, one of two possibilities exist: either Islam makes societies unhappy, or unhappy societies are more likely to become Muslim.

Meanwhile, there wasn’t a strong correlation between a country’s population and percentage that are Christian, with the exception of Education (p<0.005) and Personal Freedom (p<0.0001).  And there is no significant correlation to Hindu or Buddhist populations and any of the happiness scores (presumably because the numbers are so small).

Perhaps the biggest common thread among these 6 test cases is that terrorism stems from a disenfranchisement of a minority group.  This disenfranchisement leads to terrorism if the populations is particularly susceptible to Islamic, Marxist, or Revolutionary call to arms.  It appears the best approach to curbing terrorism is to either kill the figurehead(s) of prominent terrorist organizations or address the concerns of that disenfranchised minority.  As seen in Colombia, killing leadership only has a temporary effect on curbing terrorism.  However in Spain, Iraq, and Thailand, it appeared that improving democracy and removing the oppression leads to more permanent decreases in terrorism.

So, what does that mean for the US?  Do we have disenfranchised minorities?  Are we doing anything to address these issues, or are we just furthering their disenfranchisement?  I don’t really have an answer to these questions, but I think if we want to really fight a war on “terror”, we need to really understand what it is that we’re fighting.